As we passed through a small, isolated village in northern Sierra Leone, a small local child, glimpsing our car, sprinted towards us shouting "oporto, oporto"- "white man, white man". No electricity or running water, he probably hadn't seen anyone white for at least a year, if ever before. He had pure excitement in his eyes and a beaming white smile and as he neared our car, down came my window and up came my breakfast of goat kidney noodles - carb loading has certainly gone better in the past; this was going to be brutal!

I was in Sierra Leone for my final two challenges - to podium at the Sierra Leone marathon and finish in under three hours. My preparations had already got off to a bad start - travelling with British Airways I was sat next to a larger than life gentleman for the overnight flight. Unfortunately he was also larger than his seat, his waist and arm covering the entire central armrest and several inches of my seat. My only escape was to contort my back over the window armrest and sevens hours later I arrived in Freetown, having been unable to sleep at all and in considerable discomfort.

Following that morning's oral offerings and the remaining three hour drive to Makeni the day before the marathon, I spent the rest of the day trying to force down pretzels and water. I'd taken two days worth of carbs with me and by the evening in theory I'd eaten my carbs requirement for the day, but was still way down on calories. I'd had twelve pints of water trying to re-hydrate and was stuffed and couldn't face anything else. We were up at 4am, so I finished my 200 grams of beetroot and went to bed.

I beat my alarm and went through my usual pre-race routine - breakfast of a large can of rice pudding, a beetroot shot, two imodium tablets and a nectar energy drink. I woke Kate to give her plenty of time for breakfast before realising I was still on UK time - it was only 3:30. Wide awake by now we double checked our provisions - nine gels, three electrolyte tabs and six pro-plus and made our way to the buses.

The starting area was electric. We were running from the local school and in addition to the 150 international runners over 700 locals had also registered. It was still dark and although the temperature wasn't too hot, it was pretty humid and everyone paced around, trying not to look nervous. I hoped I wouldn't need to go to the race toilets, twenty minutes out, my stomach was telling me otherwise. The local toilets were a hole in the ground, which by now had been decorated by numerous runners. Thankfully there were no lights to reveal the horror within and I braced the walls for dear life, as if the building was about to cave in on me, lowering myself into position. Despite and maybe because of my carb loading I clearly wasn't in perfect race shape.

The start line was very informal, the full and half marathon were starting together, so I lined up behind last year's winner, a man a third of my height and half my weight. The winner of last year's half was also running the full marathon (he won in 1.15 last year) so there were already two competitors who should have me beat before considering the rest of the field. Settled into our starting positions, we were all swiftly moved aside, as it became clear that the President had arrived; he was running the 5k and as the sun rose, he set us on our way.

I knew there would be a few runners starting quicker than me, but at least twenty runners shot off up the hill and even following a swift 6.20 first mile, I was well down the field. I'd been torn between going for a sensible negative split or trying to break the back of the race before the heat overwhelmed me. I'd mentally settled on a 6.40 mile pace, but two miles in, it felt extremely hard work and I already wanted to stop and walk.

I was running with a local, who clearly knew people on the course. They were going crazy for him, then one friend laughed at him and spoke some krio "... oporto ... black man." He laughed, looked at me, then upped his speed. I'm pretty sure his friends were mocking him for being beaten by a white guy.

It normally took me twenty miles to feel this tired, the humidity was unrelenting and drowning my lungs. When the second placed international runner caught me at mile four and suggested we upped the pace, I knew I was beaten -sub three was never going to happen. I stopped looking at my watch and decided to only listen to my body. I've run enough marathons to know how it should feel, so I tried to relax and started running blind, my only hope being that I'd somehow recover on the run and pick it up at halfway.

As I ran I could hear a drumming noise with every step. I looked around for an explanation, before realising it was my stomach. My body was hosting its own internal race and I was preying that my Imodium would win - reaching my lower intestines before I received an unwanted spray tan.

Thankfully it won and by ten miles I was starting to settle and could fathom completing the race. We doubled back at half way and I counted ten runners ahead of me, the other international in tenth. Sub three was still out of the question, but I was growing stronger, closing in on tenth and knowing the local runners were inexperienced at this distance, hoped that I could start clawing back the places.


The next six miles or so were great. Passing the first international at fifteen, I could take in the surroundings, winding through the local villages, the kids running alongside. There were riverbeds of singing bullfrogs and I even started enjoying the total reluctance of some of the local marshals to leave their seats.

We were given water in pint sized pouches, that you opened with your teeth, often drenching you in water; a welcome refreshment. The locals had clearly never experienced many races before, some of them only to retrieve the water (in their own time) once you'd requested some. More than once I ran past a station of very relaxed marshals, signaled for water and disappeared over the horizon before they'd mustard the energy to move. Thankfully there were plenty of water stops, so it wasn't a problem, although I was a bit perplexed at mile 23 when someone shouted at me from the aid tent to slow down.

By this stage I felt pretty slow. I'd made progress until mile 19 or so when we headed into the hills through the local villages on single track. It was tough going and I felt as exhausted as I normally would at 24 miles. I was still catching runners, who were also wilting in the sun and I only resisted the urge to walk up the hills by repeatedly reminding myself that the second place international wouldn't be walking; I had to push on.  We doubled back over a railway line, which allowed me to gauge where my competition was and I'd built a two minute lead, then back into the town and onto the finish.

I'd started to walk in parts through the town - I couldn't cool down and it felt like an ape was sat on my chest. I was also pretty sure that the first international prize was in the bag, so the time became irrelevant. The locals were still cheering, but I could tell from their looks they had no idea how long a marathon was; there was no sympathy for a walker. I took my top off crossing a junction and the locals looked in disbelief, transfixed by my daz-ultra white torso, it must have seemed to them like starring at the sun.

The route split - one sign for 5k, one for full and half marathon. The marshal signalled towards the 5k route, I figured we must have split here on the way out and the on in was the same for everyone Either way I was following his suggestion; he was holding an AK47 after all. It was armed marshals from there on in; maybe they'd believed that I really was Robin van Persie's brother!


A walk and a jog and the finish came into view. There were throngs of street children and locals and my customary sprint created a massive roar from the crowd - what a finish. And it was all over.

Garmin of my race on Strava

Six challenges attempted, four completed. I'd have taken that at the beginning, but always thought there was a chance of achieving them all. It was just disappointing to have finished with such a whimper, losing pace barely an eight of the way into the marathon. Given my stomach and the morning of chunder, I was happy enough with my time - 3.15 and pleased I hadn't given up. I have no idea what the temperature was, apparently less than last year, but the humidity was horrendous. Last year's winner was over fifteen minutes slower and the winner finished in 2.52, a pretty slow time for someone who ran 1.17 in the half last year. An indicator of just how humid it was.

On a different day sub three was probably possible, but even with the wind behind me I wouldn't have come third. The day ended with the podium, three uber fit Sierra Leonians taking their rightful place. I picked up the award for first international runner, a podium of sorts and my first proper trophy. It was a great end to a six month slog that thanks to you is looking like it is also going to end with a brand new school and the funding of a teacher for at least three years. Guess who gets to name it? :) 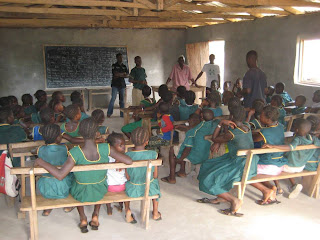 I give you 'The David Hellard School for Future Presidents!'
Donate now - http://uk.virginmoneygiving.com/DavidHellard