Saturday was the Dirty Weekend, a 20 mile assault course with 200 obstacles including an 110 meter monkey bars. My challenge was to finish in the top ten overall based on time.  It was two weeks since my last race (the Questars weekender) and had a full taper for the race, although my last long run in Devon took in 1800 feet of ascent, a  lot more than I would want. I'd built up to 100 push ups and 25 pull ups per session and was in the best shape I've ever been for an adventure race.

With 5000 runners, we were split up into waves of 250. I started in wave two - fifteen minutes behind the leaders. Wave one typically is the fastest as no queuing, but my plan was that in wave two I’d get more help from other runners on obstacles, could see runners on the obstacle in advance to help me figure out the best technique and also I’d always have someone to chase after, to keep me running hard. That and it was £20 cheaper!

Most people assume these races are won by GI Joe types, but in reality the muscleheads are too heavy to get round the course quickly, most obstacles require fitness and a good power to weight ratio and as a result athletic runners tend to dominate. After a night being kept awake listening to the tent next to us playing a tedious game of ‘I have never’ into the early hours (who's never even had sex outdoors? really?) I woke up at 5.30 to eat some breakfast and made it to the start line for our 8.15am start. Rain was forecast, but the morning was bright - good race conditions. 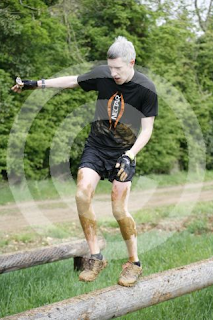 A brief warm up by the rat race Timmy Mallet and we were off. Within the first hundred meters it became evident that only two of us were going to be competing for the wave two title. John, a friend of a friend, was running alongside and a brief chat confirmed that our half marathon times were pretty similar, given my previous three challenges I was worried about how quickly I’d tire and if he therefore had the advantage. We hit the first set of obstacles together – climbing through a car, over a six foot wall, through some tires and up and over a lorry and I’d managed to pull twenty meters ahead. He sped up to catch me and fairly soon we were into a large inflatable and then met by eight rugby players with training bags. The first two double teamed me surprisingly hard, then my Jason Robinson instincts kicked in and I even managed a hand off, before escaping the rest of the group. John has dropped right back and feeling confident that I'd stretch my lead on each set of obstacles I set about the task of reeling in wave one. 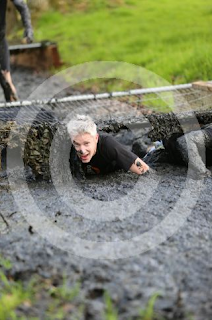 My legs already felt surprisingly heavy, the climbing was really draining and I could feel the hills from the previous week still in my glutes. Thankfully the course was very flat, so I kept up the leg turnover and pushed on. Over the next ten miles I picked my way through wave one - face down through mud, up in the trees of Ewok village and then we hit the main water section. It was brutal. We had several hundred meters wading through a waist-high mud based pond. Every step was incredibly sapping, so I developed a doggy paddle technique, pulling on the bottom, taking the weight off my legs and started accelerating through the pack.  Mud turned into open water swimming and then hauling yourself over children’s inflatables. Should be fun, but the holds were tiny and as a result you couldn't get your feet in them, so you had to pull yourself over four meter high obstacles using just upper body strength.  I'd packed nine nectar gels with me, which seemed excessive, but was trying to treat the race as a marathon, hoping for a similar finish time and it made a huge difference. I never stopped other than grabbing water and people started cramping up and dramatically slowing down. I’d made it up to thirtieth in the lead group and with the last ten miles mostly running, finishing top ten seemed a real possibility. I was barking at every steward 'how many ahead?', being a chaser felt great and every person I caught sped me on. 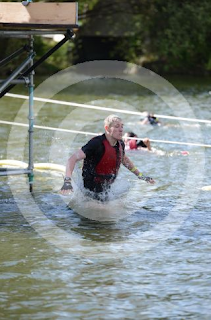 By 13 miles I was up to 11th and everyone looked broken, using each obstacle as a chance to slow down and catch their breath. Our legs had been shredded crawling over jagged rocks in farmer Giles fields (some kind of razor blade farmer I assume) and with our upper body strength fading we were having to push a lot more on obstacles with our knees and shins to climb, resulting in further cuts and bruising. I developed a flying arse jump and seeing everyone else crumbling drew strength, took my proplus and sped up. 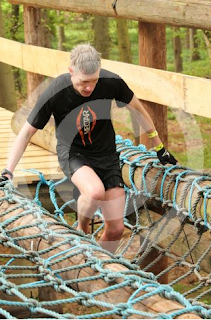 By Sherwood forest I could see 5th, 6th and 7th ahead of me and I was the only one still running hard. The finish was a ten meter wooden tower – I raced up it, applauded the crowd and then descended with my trademark cheesy grin. I’d made it up to fifth, despite their fifteen minute head start and ended up with the quickest time of the day – 2.51 kaboom! 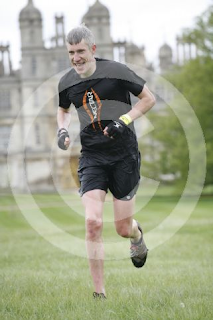 Having the quickest time of the day, but not officially winning has led to some confusion among friends and competitors alike, so just to clarify - you needed to start in wave 1 to win. My time was quickest, but I'd received help on a few of the obstacles - most notably the large inflatables in the water, which saved me a considerable amount of time. If I'd have started in wave one I think I'd have probably finished third.

The best thing about starting a race at 8.15 is that you're done by 11 and there was nothing left to do other than head to the bar to drink 3000 calories worth of beer to try and achieve calorie neutrality for the day.

So next up the final two challenges at the Sierra Leone marathon - top 3 in sub 3. Don't think I stand a chance, but then again I didn't think I'd be heading there with a shot of a clean sweep. Prey for freak snow storms!