The Great British Beerathon is a five mile slobstacle race, where runners run five-one mile laps, drinking a pint and eating some food at the end of each lap.

Now in its fourth year, I've always hidden behind my organiser role to avoid having to take part, preferring to laugh at friends from the safety of the pub and hint that if I were to run I'd obviously blitz it.

Having won two of the previous years Sweetheart insisted that I run this year, partly to shut me up, but probably more to do with his concern over what the calories would do to his back fat.

Fancy dress chosen, I was feeling pretty confident.  I'm not in the greatest shape, but I can drink like a champion (at least in my head) and six minute miling should be fine, even with a baby bump, giving me 90 seconds per transition.
After an inspirational speech from Sweetheart, explaining that he'd laid on several specialist areas around the course should we feel ill, also known as walls, 120 of us lined up in full fancy dress.  The first mile was pretty quick, two people leading out the first lap in 5.20 or so, I came in 17 seconds behind, charged up the stairs, grabbed my Guinness and muffin and headed for the beer garden. The two ahead of me became one, we guzzled, then gasped and we were off again 1.06 transition, piece of cake ... literally.

The second lap felt ok if a little slower (6.12).  The leader dressed as a Evel Knievel (Matt Wilto), took another fifteen seconds out of me and I began to notice I was being stalked by a monk (Andrew Fargus), I began to feel like Robert Langdon (but with the ability to solve simplistic puzzles on the first page). Back up the stairs for bitter and samosa.  The samosa was a decent size and piping hot, but we were making our way through it as the monk inhaled his and took off with the Evel.  25 seconds later and I followed.

We were beginning to attract a bit of a crowd on the course.  The builders' laughs grew louder with each lap, there was a homeless man, asleep on a step motionless throughout (I hope he was asleep) and the tourists were sometimes already filming as we passed.  The roads had been closed for the London cycle the next day, but the tourists assumed we were the main event and were getting fully behind us.  To be fair the Evel was running quick enough to be a cyclist.
Third lap of 6.09 and we were back in for slobstacle three - lager and a Cornish pasty, I say Cornish, only because it was the size of Cornwall.  My chomps were merely flirting with it, but thankfully nearly everyone was struggling. My only solace was that a friend of mine Jody had the vegetarian pasty and it was bigger than his head (and this is man who needs custom made cycle helmets). He flashed me a look of 'this is all your fault you bastard', it hadn't been planned, but I wish it had.

Another friend Chris strutted in with a half eaten pasty. He's not a bad runner, but definitely a better cyclist and seeing him so close behind me was surprising. Then it all made sense, not only was he an ironman with a hunger like no other, but boy does he have a mouth on him (in the best possible way.) Evel was in a world of pain, the monk going steady and Chris was devouring like a hungry hippo. Chris was out first, followed closely by the monk, I struggled and after 4.47 finally headed out for my fourth lap.

My belly was bubbling by now and starting to pick up a momentum of its own. I was still trying to keep the pace up, knowing that the next slobstacle was a smaller porkpie. If I could get in quick there was a chance I could neck the pint and be back up with the leaders. 6.11 for the fourth lap and then it hit me. The cider was sweet and sickly, the porkpie burningly hot, but thankfully not that large.


The belly had been doing a pretty good job as a washing machine and felt like it was frothing up my neck. I couldn't even take the smallest bite of the pie without the feeling that it was all going to blow. A friend of mine Devo was sat in the corner still on his pasty. He would have been a favourite for the race, but he was coming back from injury and on Thursday night had taken on the Red Dog hot wing challenge. His stomach still hadn't recovered and having snuck into a corner for a bit of privacy, expelled its content right in front of the race photographer to the cheers of the crowd.

I saw away the cider, but was still left with my entire pie, as Chris and then the monk strode away. Minutes later, stood in the corner, I was battling to swallow anything without having to fight to keep the food down, dry retching with each attempt. Knowing the race was lost, I forced the pie into my mouth and set off, mouth still full of pie, a woeful transition of 6.49.

I felt like I was moving ok for my final lap, waving at the builders and dodging the tourists. I looked like a pregnant samba dancer, waddling like a duck. As I rounded the final corner, I kicked in for a sprint finish only to hear the pounding of footsteps behind me - Evel was trying to take me on the line. Thankfully I still had a but left in the legs and ran into the cheering crowd with a time 45:09, six and a half minutes behind the winner Andrew Fargus, the monk,  in 38:42.

I felt pretty rough, but a couple of decent burps and we were back on the sauce. The race had been a lot harder than I had expected. The booze and the running was fine, but the food just sat in your stomach and by the cornish pasty there were no gaps left to fill. Great pacing by the monk and much kudos to Rob Foster, the current world record holder who averaged 7:30 per mile with food and drink.


The rest of the runners slowly filtered in and we started the customary drinking circle to wrap off the event, dishing out drinks as punishment theroughout the race (of which there was plenty.)


Special mention must go to Zacharay Davidson, winner of the best male fancy dress category, dressed as David Seaman. He won over the crowd's hearts and as a result ended up having to drink his body weight in beer and half again in gin. 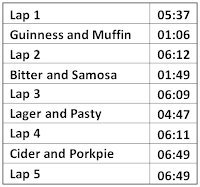 We'll be back next year and I'm planning on running again. Don't think I could get the record, but with a bit more chomping, will hopefully put up a fight until the last lap at least.